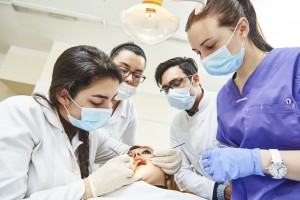 The Aesthetic Advantage team is built up of several incredible dentists from all over the world, and one being Dr. David Ward, DMD. Dr. Ward and his team, along with others, gave a very special patient the gift of hope with a smile makeover.

Roger came in a on an ordinary day in March 2011 to discuss his desire for an improved smile. After their introduction and greetings, Dr. Ward could sense Roger was a bit uneasy and asked about his health and medical information. Roger then proceeded to tell Dr. Ward that he has recently seen his doctor for a medical problem and they suspected cancer. Roger then quickly became upbeat and wanted to talk more about his hope to have a better smile.

After discussing Roger’s goals and desires for his smile, they discussed his budget for the treatments. Due to financial constraints Dr. Ward wouldn’t be able to complete the full plane of crowns and veneers, but they agreed on a staged treatment over a period of time. Nonetheless, Roger left happy, chatting it up with Dr. Roger’s team.

A few weeks later Roger returned to the office, just not as upbeat – more serious. In tears, he told Dr. Ward he had been diagnosed with stage IV liver cancer and esophageal cancer. At that point Dr. Ward asked if he would like to prolong treatment, and he opted not to. After Roger left, Dr. Ward talked with his coordinator and decided that maybe they could help Roger in some way…Click here to read about how a smile makeover gave Roger hope!

Call Aesthetic Advantage in New York, NY at 212-794-3552. Visit the website to learn more at www.aestheticadvantage.com.